Alphabets in Stonehouse are part of The Diversity Trust. They manage specialist LGBTQ+ youth services in South Gloucestershire, including wellbeing support.

Hold an Equali-tea and raise awareness and vital funds for LGBT equality.

See ideas for making the most of your Equali-tea. 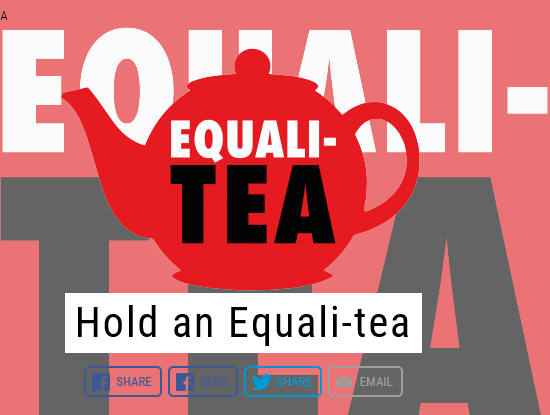 Gay Glos provides support services to Gloucestershire's LGBTQ+ community. They have youth groups, support groups for parents (run by parents of trans gender children), and work in schools and colleges to deliver training to staff and talk to pupils. Gay Glos also works with refugees and asylum seekers who are trans gender.

Gender and Identity Bullying - Guidance for Church of England Schools

The Valuing All God's Children publication provides guidance for Church of England schools on challenging homophobic, biphobic and transphobic bullying.

Gendered Intelligence is a charity which exists to increase understandings of gender diversity and improve trans people's quality of life. It is driven by a host of highly skilled freelance workers who are facilitators, practitioners, youth workers, mentors, writers, researchers, trainers, educators, artists and designers, cultural commentators, social media-ites and all round talented folk. The charity's website provides a wealth of services, resources and links for young people, educators and families.

Next steps in LGBT inclusive education: celebrating difference and developing understanding is a resource, aimed at schools, colleges and settings that have already started work on LGBT inclusion and who are looking to really embed the work. This resource includes an extensive policy section, guidance on creating an LGBT inclusive curriculum, support on working with parents and carers, as well as highlighting the importance of ensuring that a wide range of LGBT people are represented and celebrated in the school, college or setting.

Stonewall offer schools, colleges and settings the resources they need to support children and young people with SEND as part of their LGBT inclusive approach. Click to download the ‘It’s OK’ symbol supported posters or easy read information sheets.

Mermaids is passionate about supporting children, young people, and their families to achieve a happier life in the face of great adversity. They work to raise awareness about gender nonconformity amongst professionals and public, and campaign for the recognition of gender dysphoria in young people. The charity also campaigns for improvements in professional services.

In exceptional circumstances, a school may be unsure as to which gender should be recorded for a particular pupil. Where this occurs, gender is recorded according to the wishes of the pupil and / or parent.

A few Education Champions have had queries from schools about recording information on pupils who have transitioned or are in the process of transitioning, and have contacted the DfE to see if the above applies in such situations. According to the DfE it does.

So the advice from the DfE is now to record children and young people’s chosen gender on all data management systems according to the above guidance.

Currently Capita requires legal confirmation when changes are made to a pupil’s legal name, so names have to be changed by deed poll (although SIMS and other school management information systems have a preferred name option which should be used in circumstances where a name has not been legally changed). Whilst they state that birth gender cannot be changed, SIMS does not request legal documentation to support this change.

The resource list has been developed by a socio-technical research team at University College London.

Websites and Resources of Interest